How can you help a suicidal person?

Learn how to help a person considering suicide, especially if they live in your house or works in the same place as you do.

A verdade sobre a morte

Every 40 seconds, one suicidal person dies in the world, according to the World Health Organization (WHO). 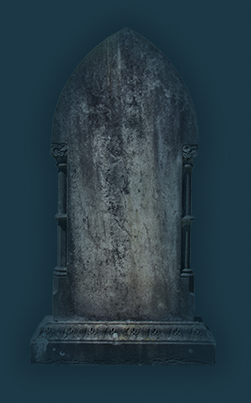 The organization states that 90% of suicides can be prevented since for every suicide there were 26 attempts.

How can you identify a suicidal behavior?

Ana Carolina Negreiros (ACN): It’s always good to be aware, because every suicidal shows signs. They always give cries of help, either with words or attitudes. If someone uses phrases like, “I see no reason to keep living,” “I want to die,” and “My life is meaningless,” don’t ignore it, because they are obvious signs. The most difficult cases to identify are those who use alcohol or drugs, since they may commit suicide at a time of hallucination or at a time of outbreak due to their abuse. So when it comes to a drug addict, it’s always good to keep an eye out.

It is important to observe closely those suffering from severe depression or bipolar disorder. Deep sadness and meaninglessness may lead one to want to get rid of the pain. In the case of bipolar disorder, both phases (both mania and depression) are dangerous. In the manic phase, people have exaggerated attitudes that reduce their fear of death, such as walking at high speed and making use of dangerous substances in exaggeration, resulting in unintentional suicide. In the depression phase, due to mood swings, the person acts as if he is in severe depression.

How to act when the suicidal person doesn’t want help?

ACN: A conversation with family members can be some kind of help, once they will be more attentive and may even convince the individual to seek professional help.

It is important to make the suicidal person find the reason that still keeps them alive, which may be a child or another family member. Use these people to help them find a reason to fight. If you hear them, welcome them and love them, it will be a big help.

When someone tells you they want to kill themselves, they are actually still looking for someone to offer them a reason not to. So, it’s always worth getting interested. We just have to be careful how we do this, because phrases like “you have no reason to be like this” and “you have everything” just makes it worse rather than helping. 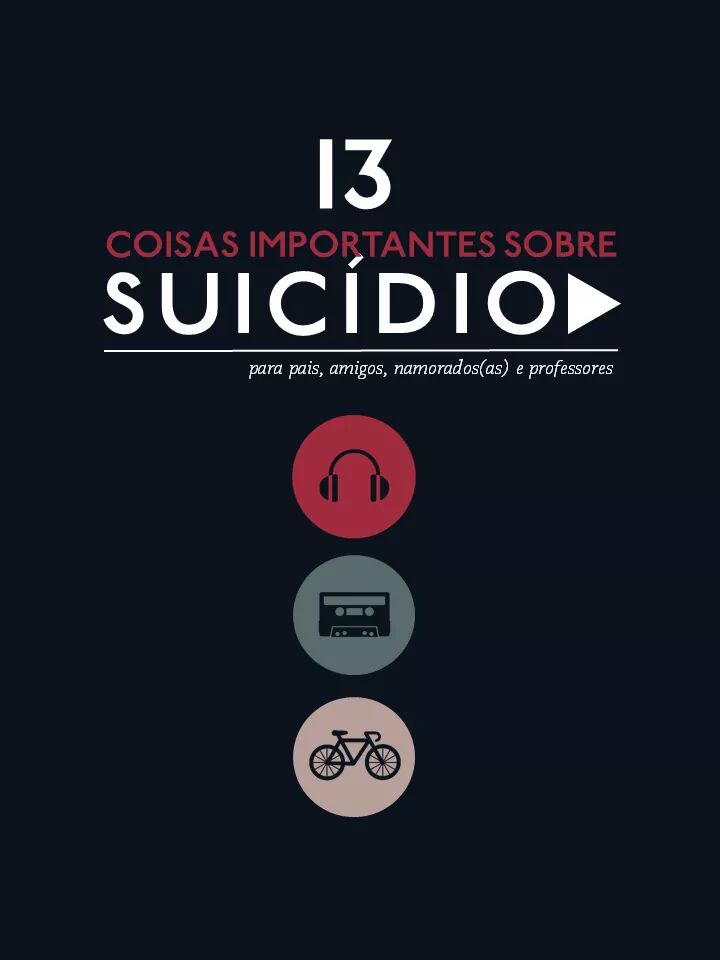 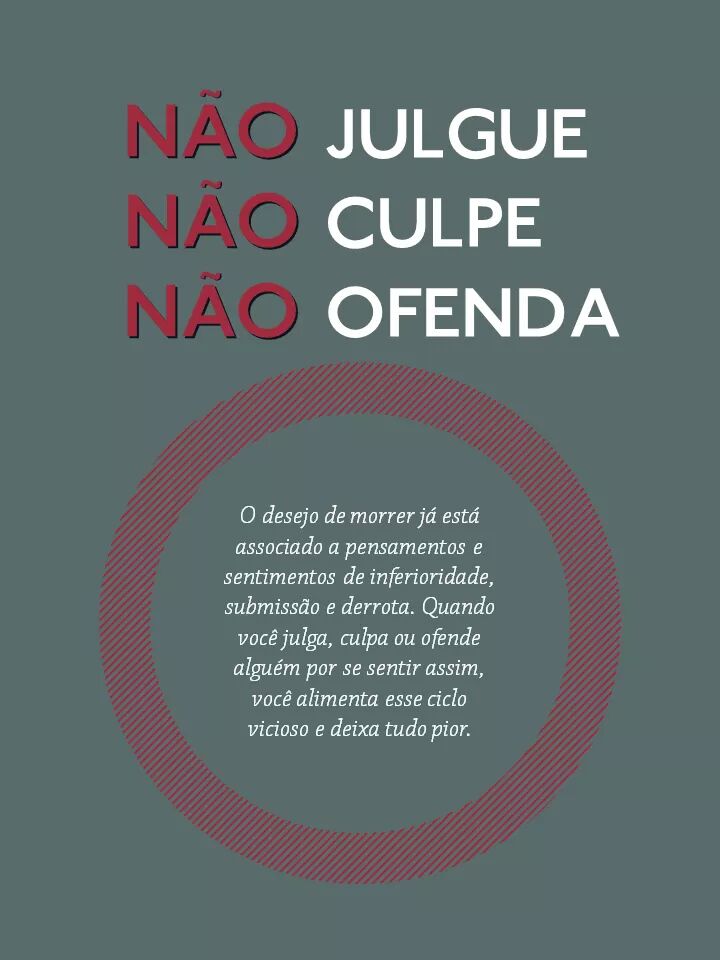 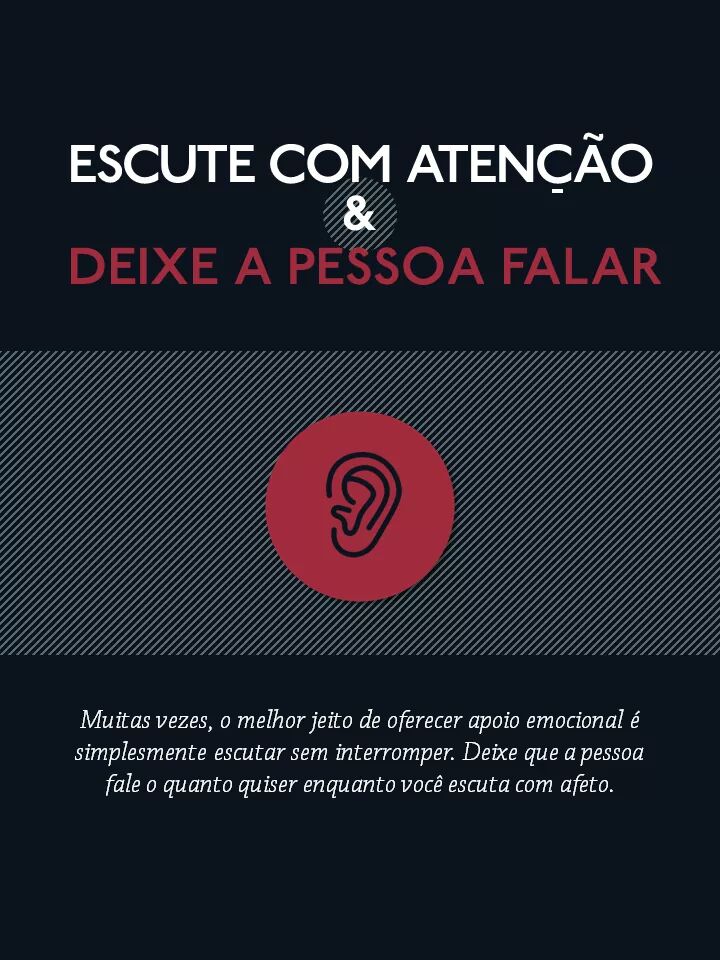 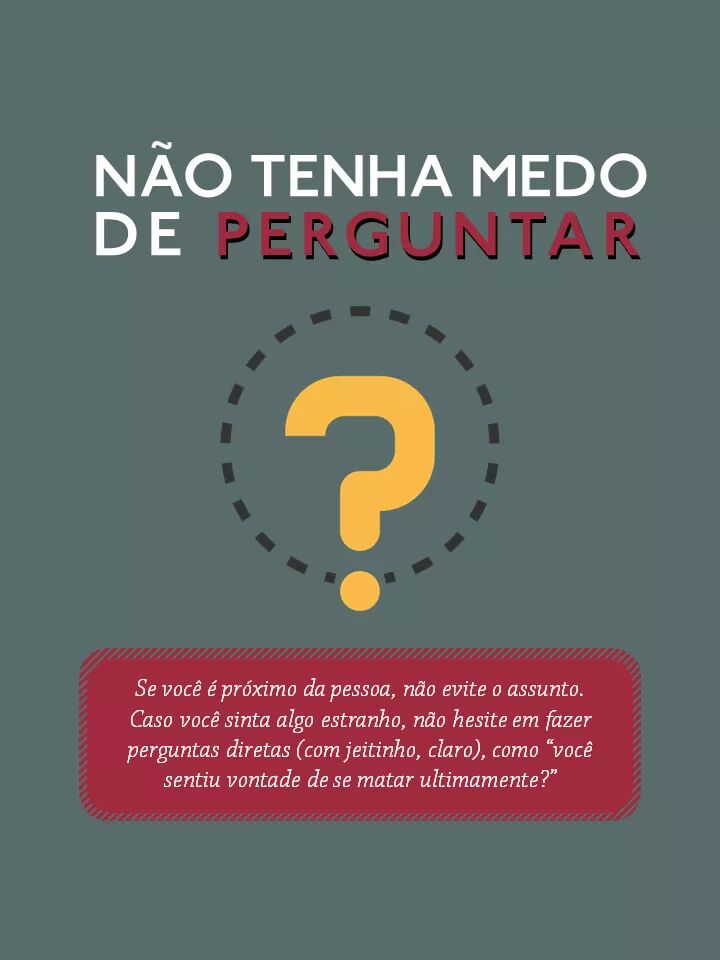 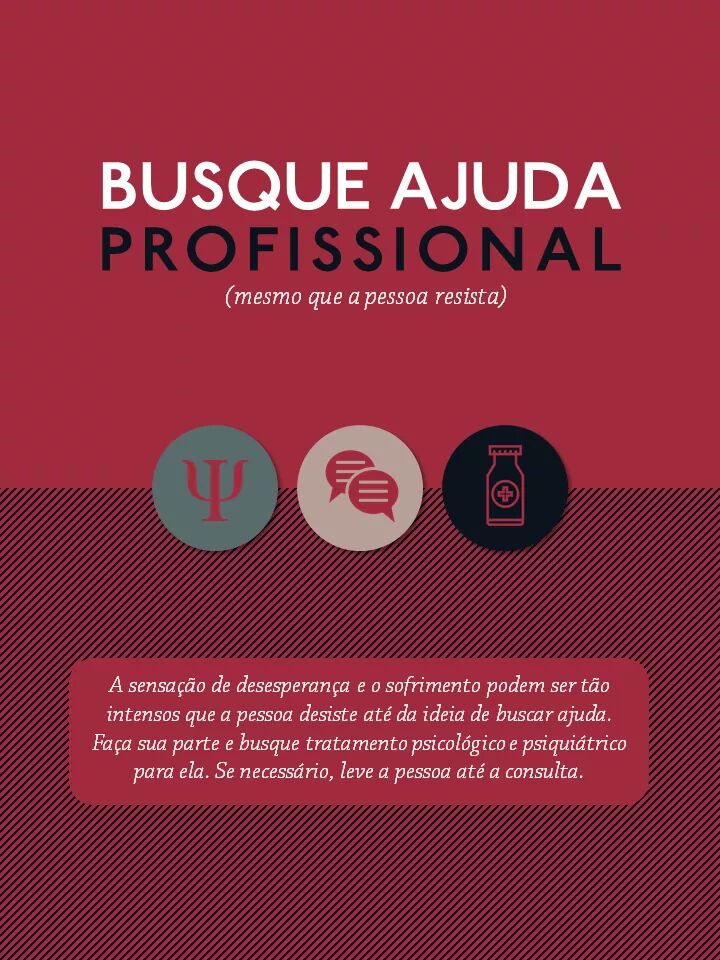 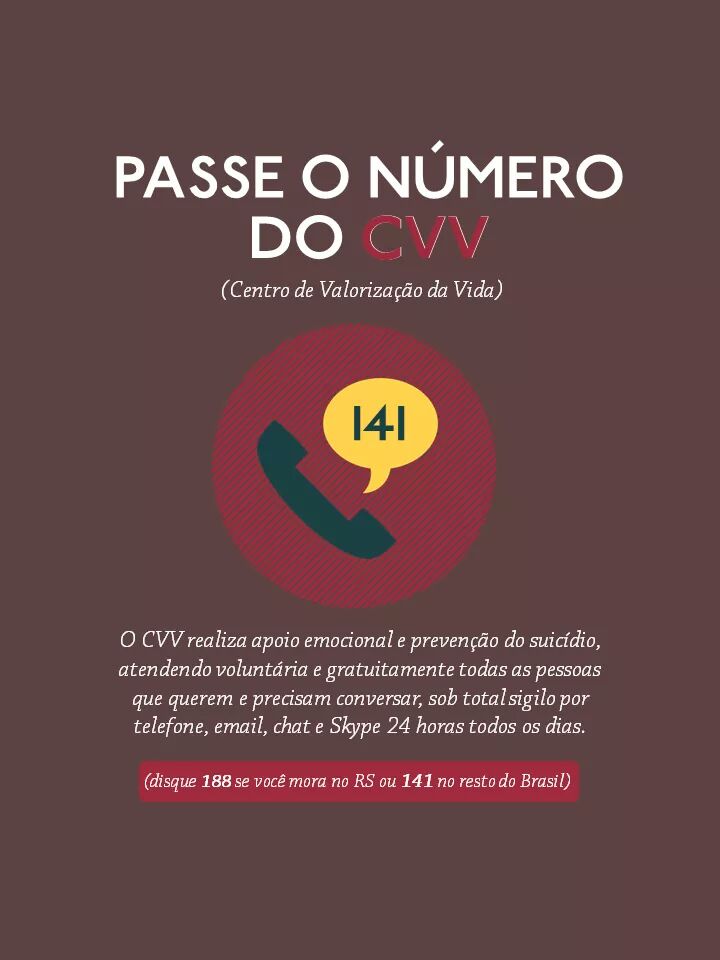 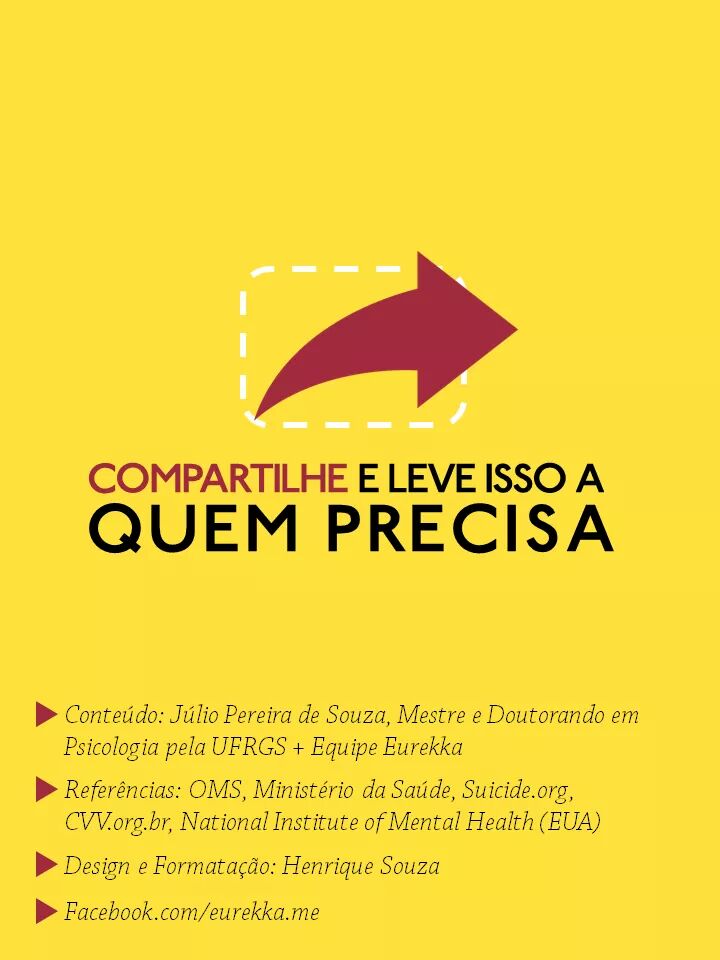 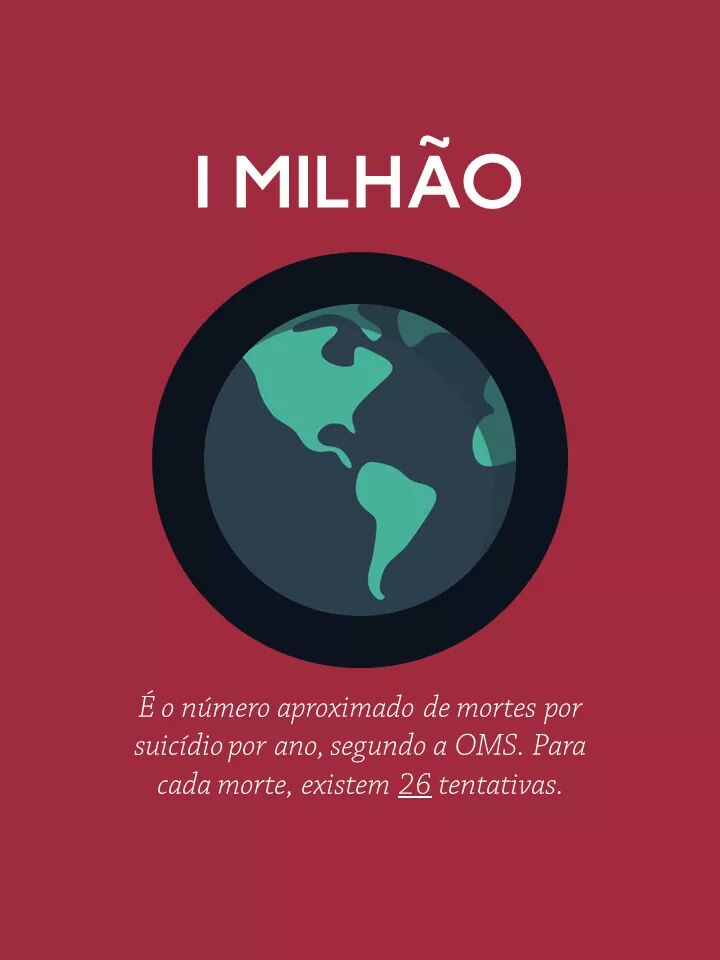 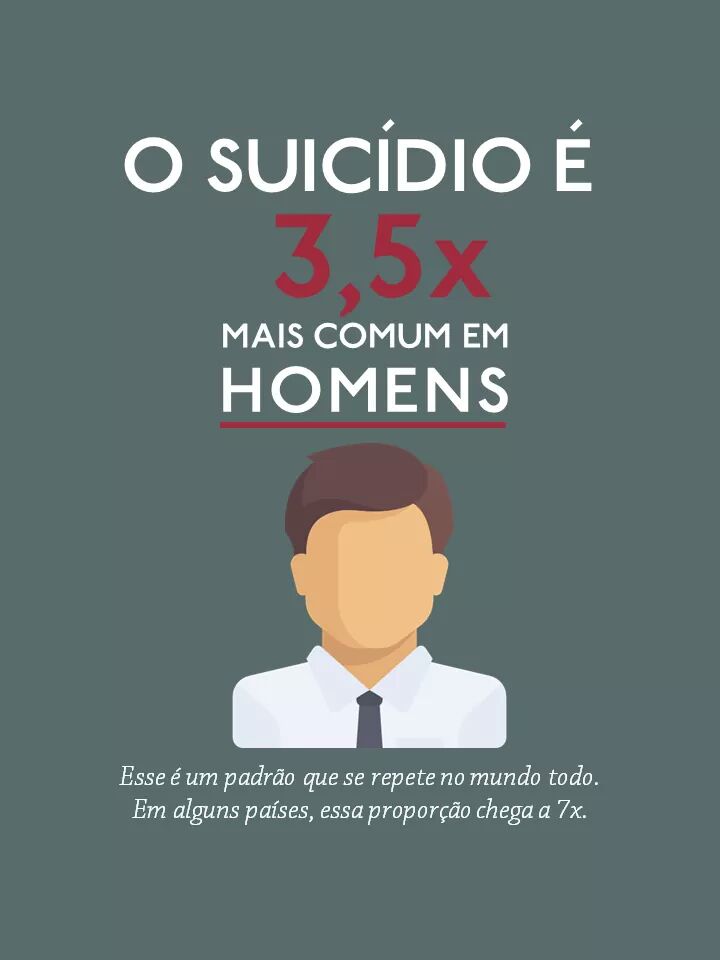 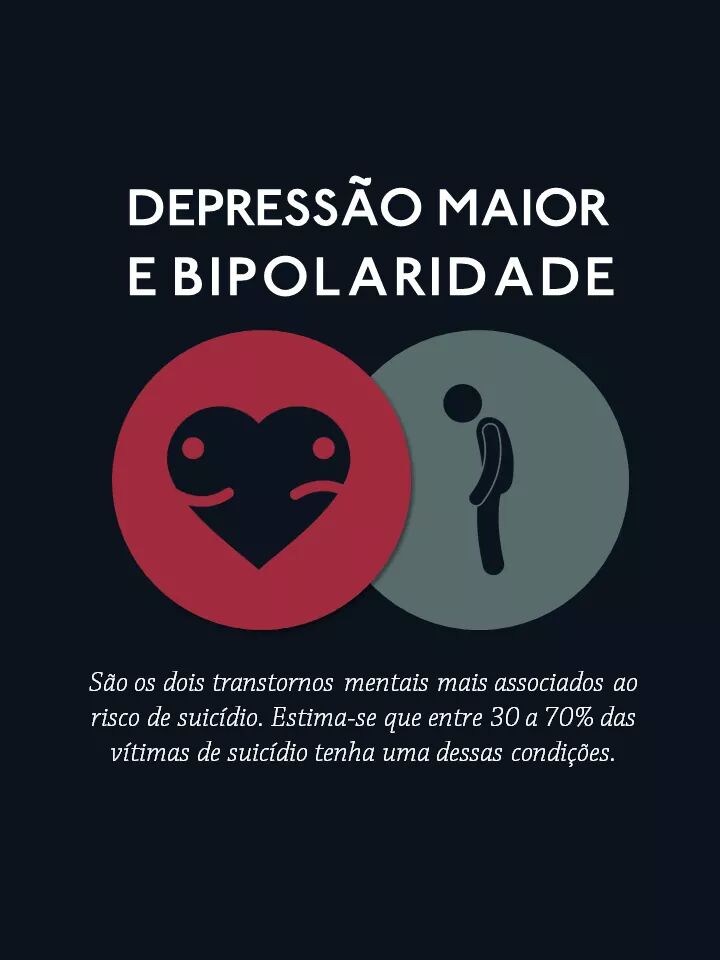 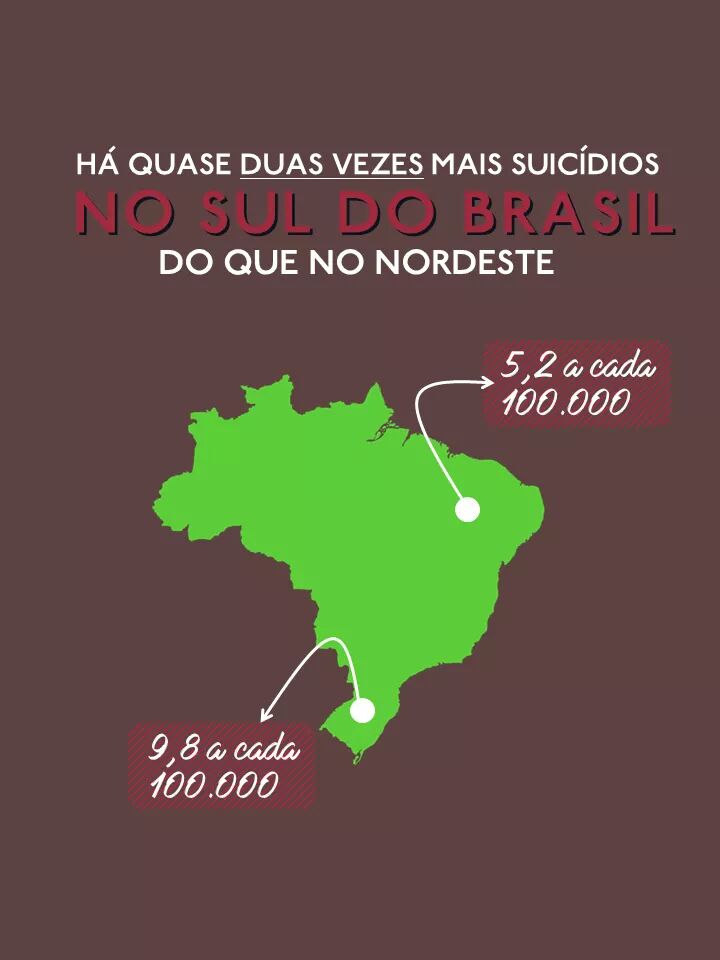 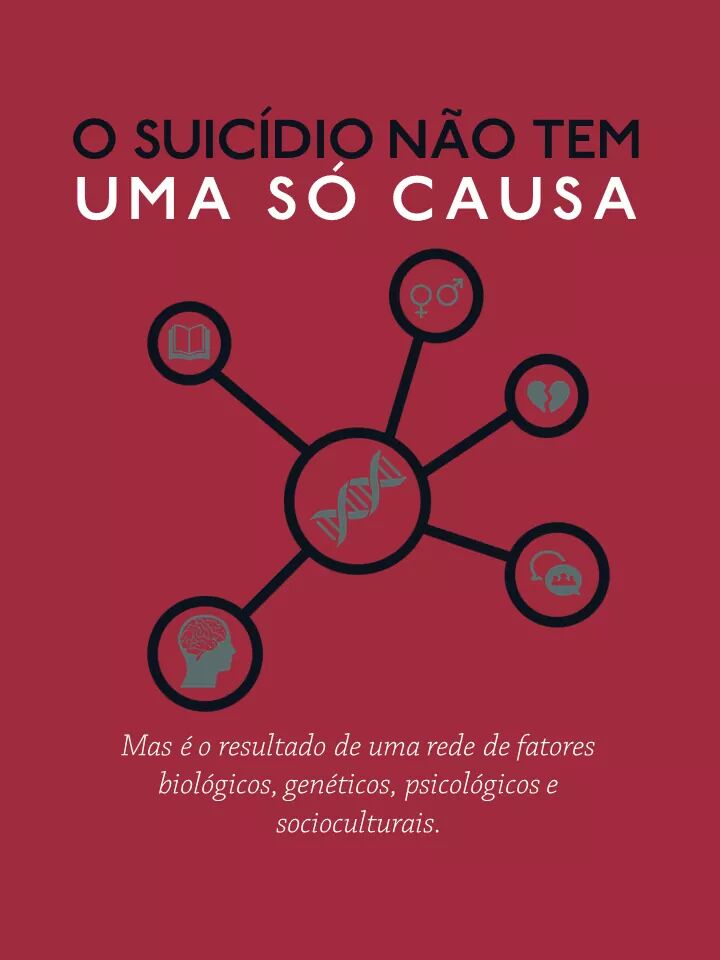 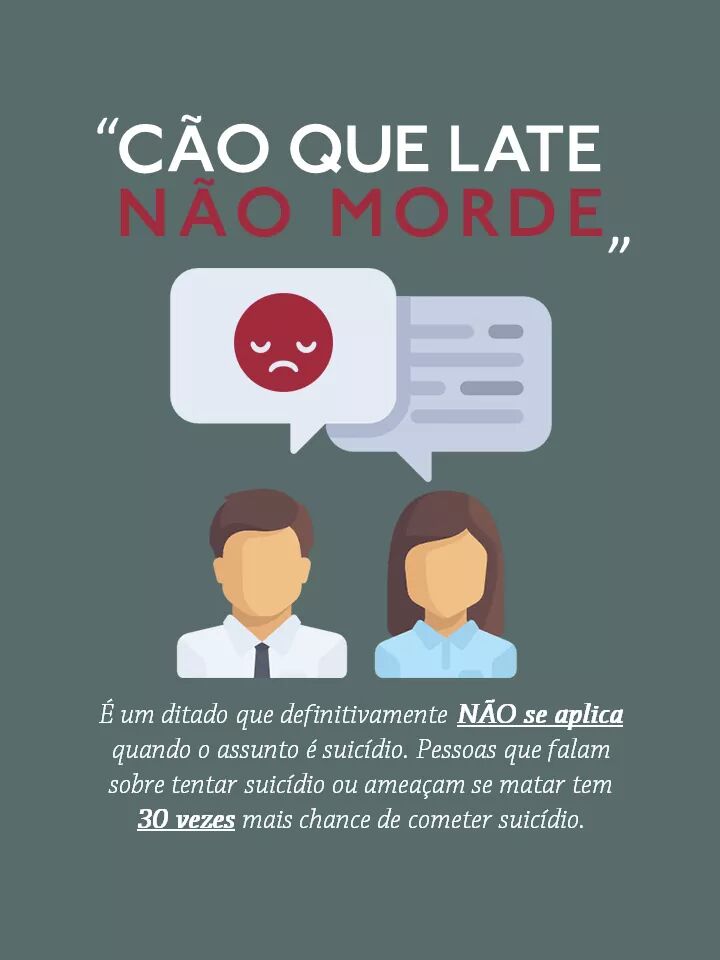 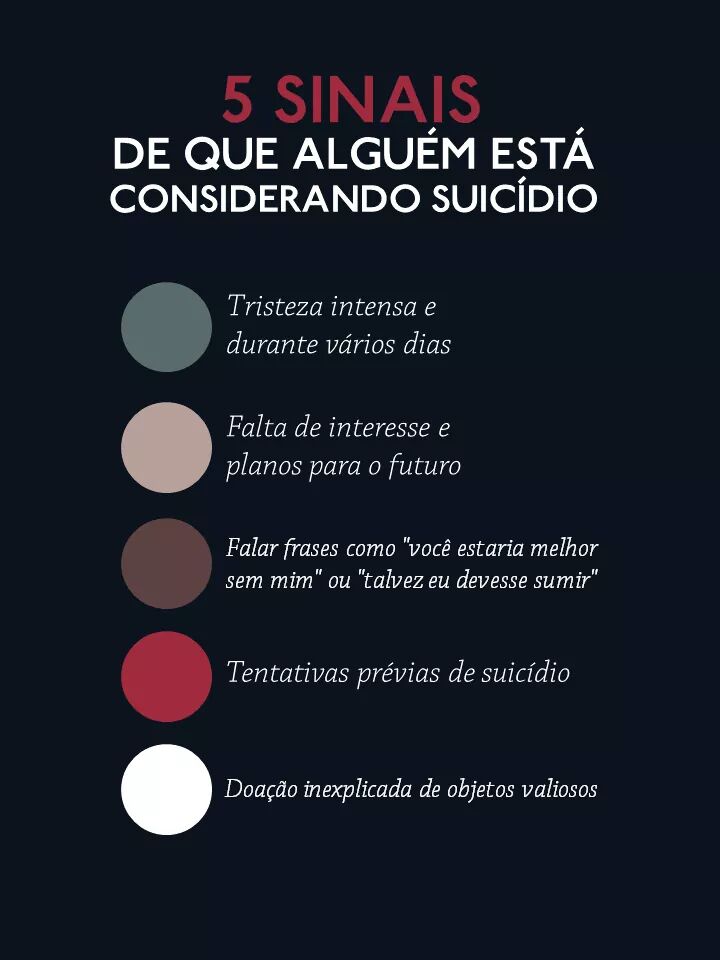 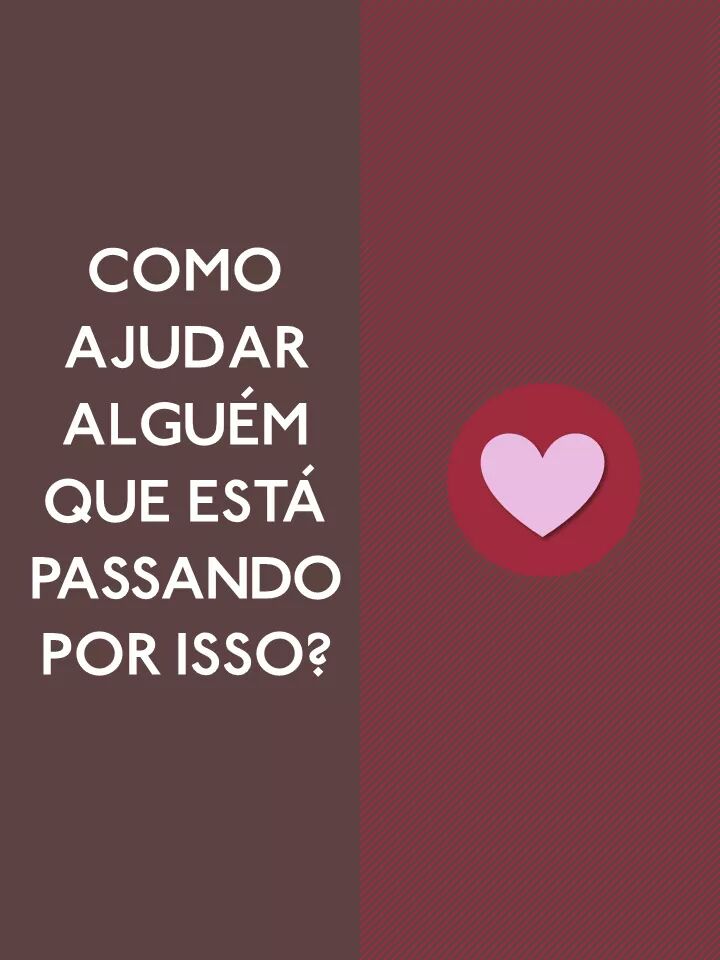 According to the World Health Organization (WHO), 10% of the world’s population commits acts of violence against their own bodies.

In 2015, for example, suicide was the third cause that killed the most teenagers in the world. According to estimates, about 67,000 people died this year. But this is not just a practice of third world countries. In economically stable continents such as Europe, suicide also appears among the leading causes of teenage deaths.

Watch the video below and understand what are the main causes of suicide:

On July 15, 1974, journalist and host Christine Chubbuck committed suicide during the live broadcast of the morning talk show Suncoast Digest. The tragic story was recorded in a film released in 2016, since the original videos had been confiscated.

These cases are unusual, but still, this subject is of great concern to the experts. There are between 10 and 20 million non-fatal suicide attempts each year worldwide, according to a study made by the journal World Psychiatry.

In May 1947, the young American Evelyn McHale threw herself from the Empire State Building icon. Her body fell on a parked limousine in front of the building. Although the fall of 170 meters was fatal, Evelyn suffered no scratches. Her body remained intact, laying on top the completely wrinkled vehicle. After being photographed, the photo was published by Life magazine as “The Most Beautiful Suicide”. The image has had worldwide repercussions, mainly because “an act like this can never be considered beautiful,” according to dozens of statements from around the world.

In 1978, members of the American cult, Peoples Temple, led by Jim Jones, from Guyana, promoted the collective suicide of 918 people, including 270 minors.

In January 2012, in China, 300 employees of Foxconn, the Xbox 360 maker, threatened collective suicide if the group’s claims were not met. Fortunately, the protest ended with an agreement between the company and the employees.

Suicide data forced WHO to make a statement and recognize suicide and attempts as a priority on the global health agenda. Now people with suicidal tendencies are in the sights of world organizations. In addition, the organization encouraged countries to develop and reinforce prevention strategies, breaking taboos on the subject.

Because of that, the September Yellow World campaign was created to talk openly about the issue and to prevent further cases from occurring. September 10 is also World Suicide Prevention Day.

Do you socialize easily?

Do you have bipolar disorders?

Do you cut yourself on purpose?

Have you ever suffered any serious trauma? (Ex. Sexual abuse, witnessed a someone’s death, parents’ separation)

Do you use antidepressants, anti-anxiety and other similar medications?

Do you have trouble sleeping?

How are you feeling right now?

You are happy and in a very healthy emotional state. You have faith and friends, which helps you feel loved and complete. But surely you know about people who are having a hard time. How about spreading to them some of your joy and your optimism? Let them lean on you; make yourself available to make someone’s day a bit happier.

Oh, and share with your friends this biblical view on suicide: Learn More.

You need to seek help. Although things are difficult in your heart, there is always hope. You are the only one who can take the first step towards happiness. Do not give up on your dreams. Look around you and inside you; see how many opportunities are there to be happy. Learn what the Bible says about suicide: Learn More.

Oh, did you know there are dozens of people willing to help you? Just click here ❤.

Have you considered seeking help? Therapy, friends and family can help you have more good days than bad days. Don’t let sadness and bad thoughts take over your life. Value the good things in life and overcome the bad moments. Still, it’s good to know that there are people who want to help you. Click here to chat.

Oh, did you know that the Bible also talks about suicide? It does, click here and understand it.

What is recommended for those who feel depressed and need to seek help?

ACN: They must look for a psychologist and psychiatrist to check neurological factors and need for medication. I recommend following what is proposed by these professionals, because many take the first step of seeking help but don’t do the treatment. Striving in this direction can help a lot. Besides being a psychologist, I am a Christian, and I believe that seeking God can also make all the difference.

Suicide is not a recent issue. Historically, cultures and races have committed suicide as a way of transcendence or because they have given up on living. The Bible also tells stories of suicidal and depressed men. Understand how they overcame their death wishes. Learn more. 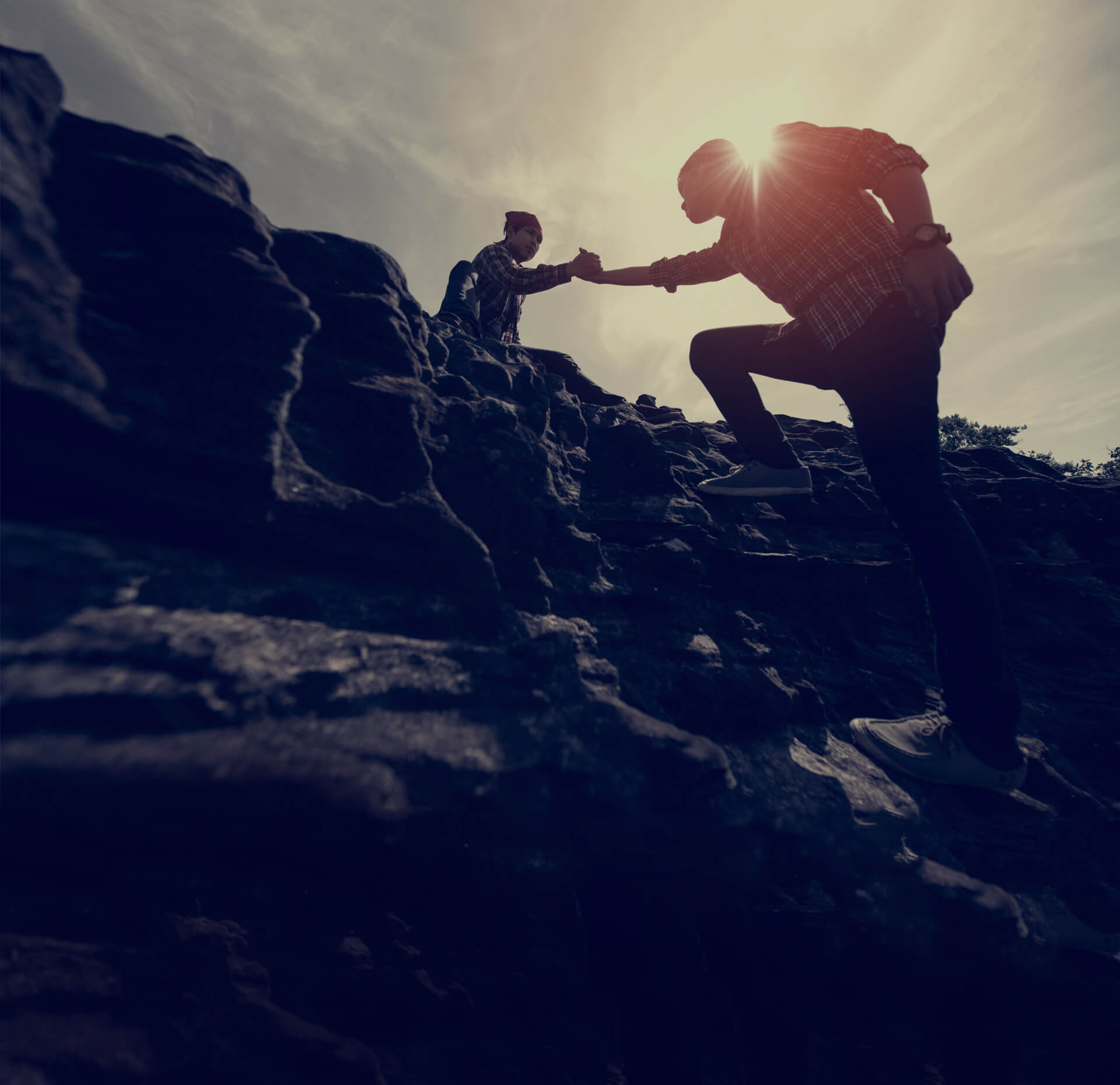 You don’t have to fight alone!