Learn everything about the most fascinating dinosaurs that have lived on the Earth. After all, child or adult, haven’t you questioned before: did they really exist?

Children and adults are all very curious about dinosaurs. 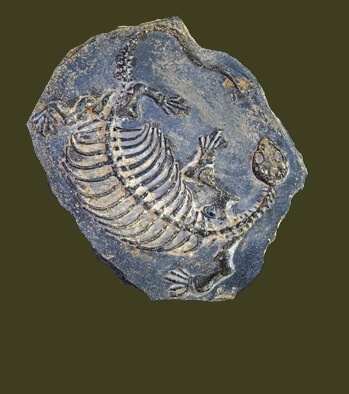 Here you can learn more about these extraordinary animals.

Dinosaurs fascinate many people. These giant creatures lived on the Earth a long time ago and all we have left today are their fossils to their stories. Besides all the theories about how dinosaurs came to be and the disappearance of them, one thing we know for sure: they truly existed and they were incredible creatures!

How do you think dinosaurs came to be and then disappeared from the Earth? Watch the video next and learn what are the mains theories on that:

But of course not all dinosaurs were giants and not all terrible killers. Approximately 700 species have been found in the world and most of them have not been studied yet. It is also quite common to find a “new species” and shortly thereafter discover that it is actually a known animal. Officially, 350 species already have fossils found and recorded, and 22 of these animals are Brazilian. Of those found, 65% were herbivores and 35% carnivores. Basically, all we know is that dinosaurs were reptiles.

To be clear, the term dinosaur covers only land animals. Prehistoric marine and flying animals were not dinosaurs. The researchers organized the species as follows:

SUBCLASS: diapsid (all reptiles except turtles).

ORDER of dinosauria: ornithischia and saurischia.

Although all dinosaurs are considered reptiles, they were divided into two large groups: the saurischia and the ornithischia. To better understand how paleontologists organized these groups, see the infographic below: 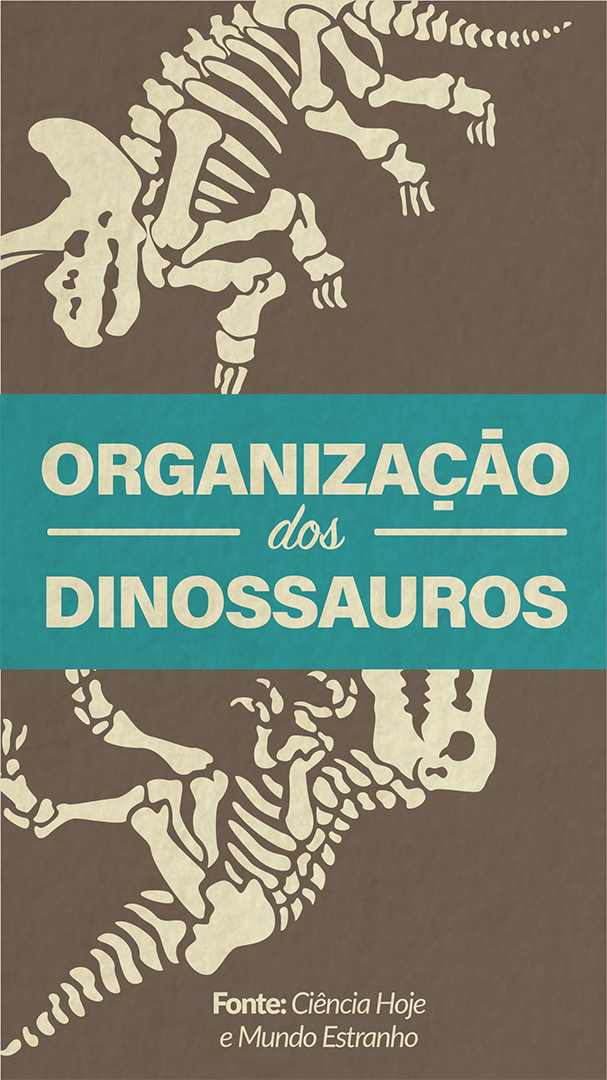 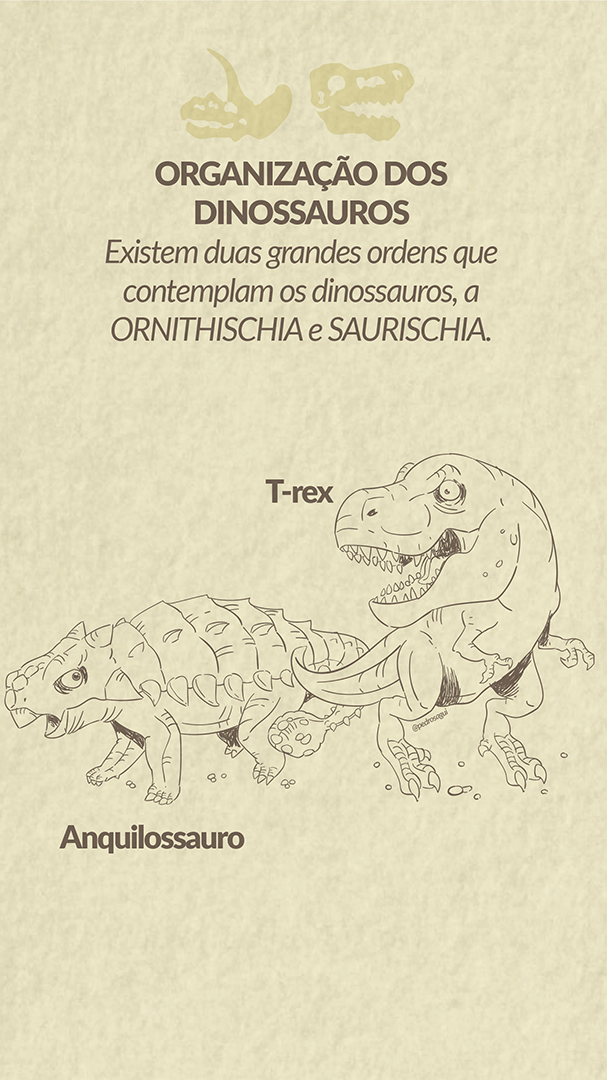 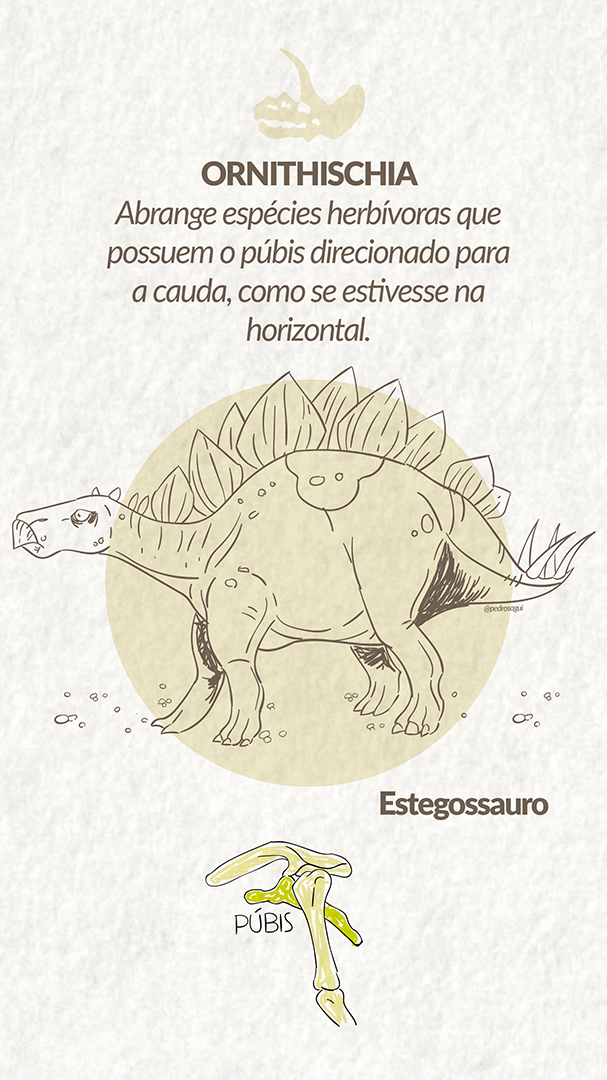 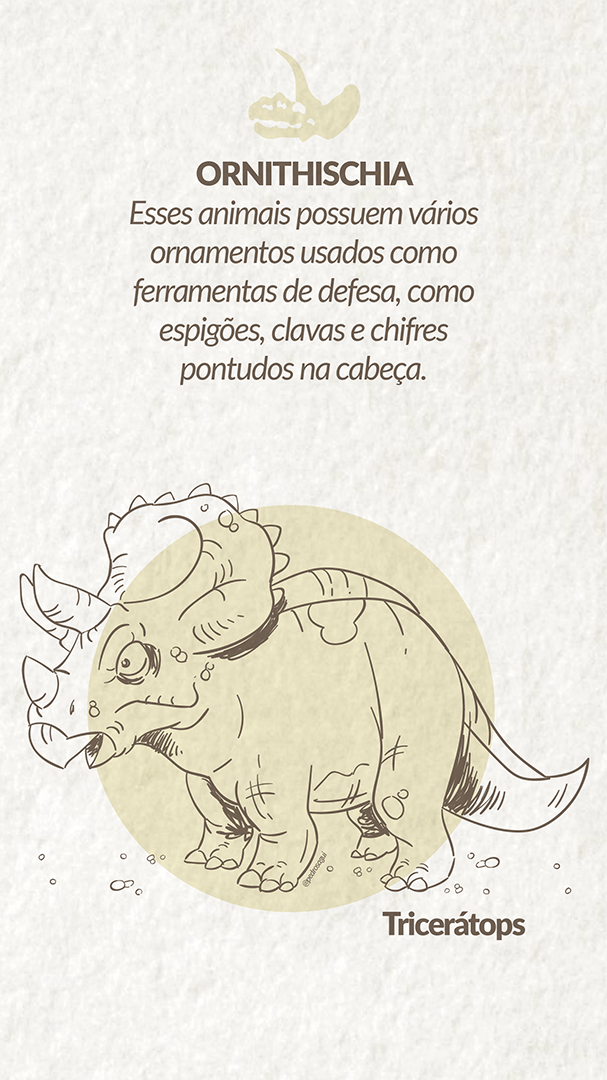 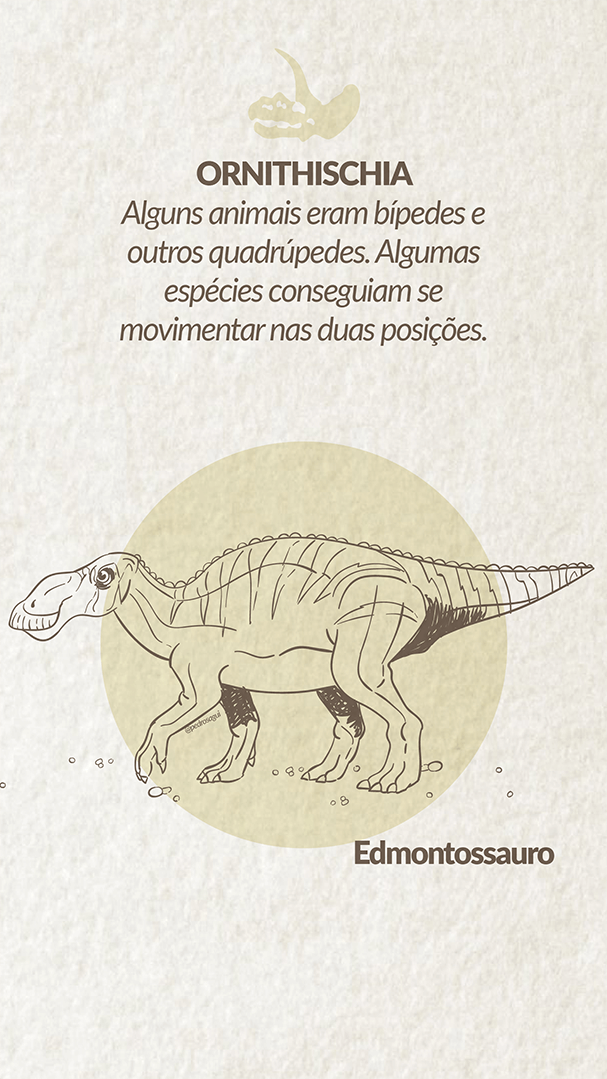 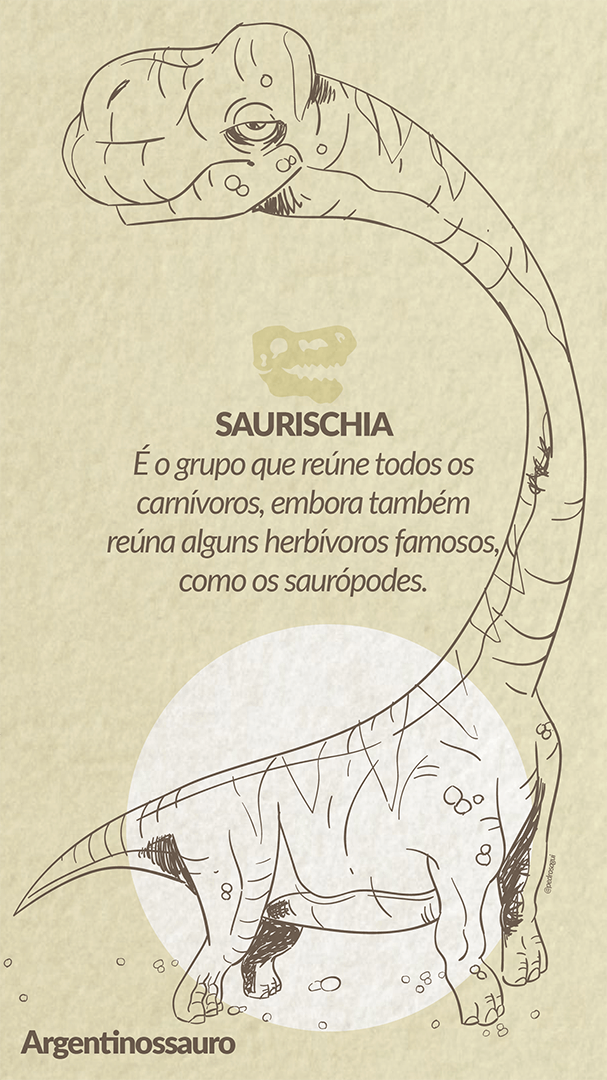 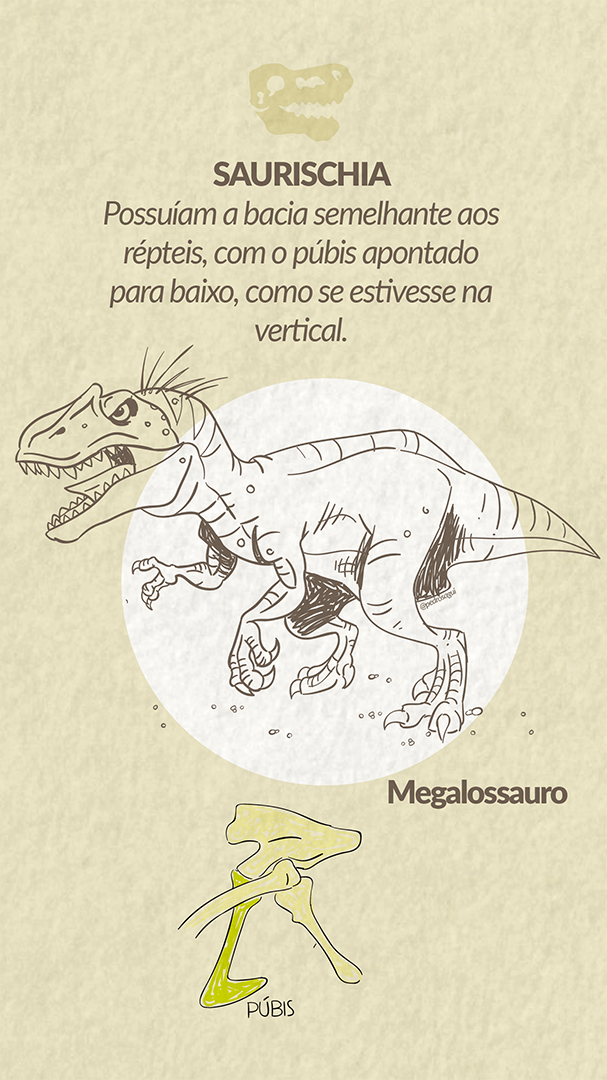 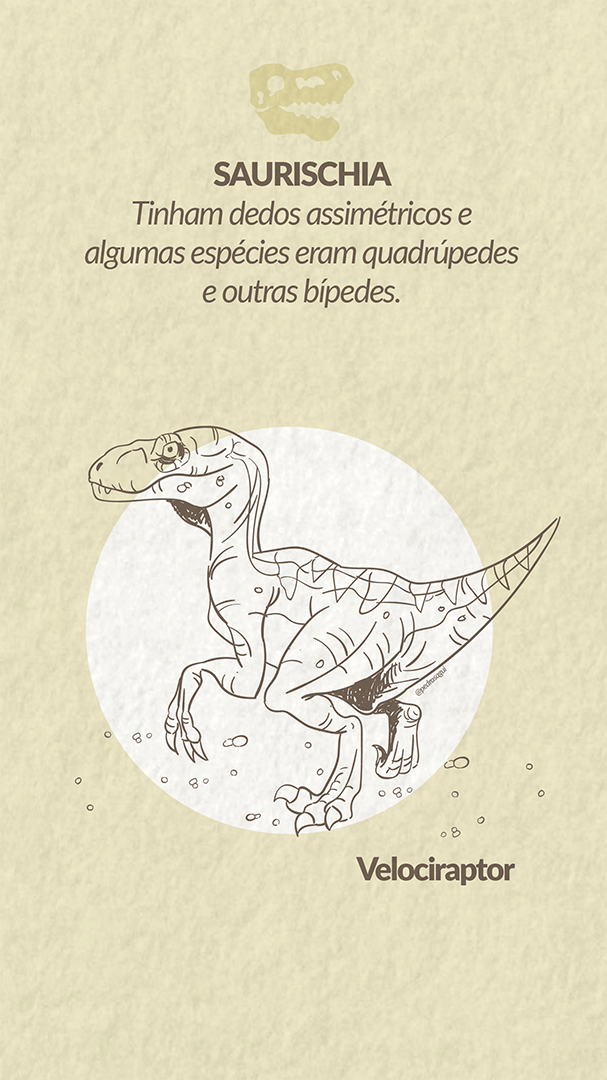 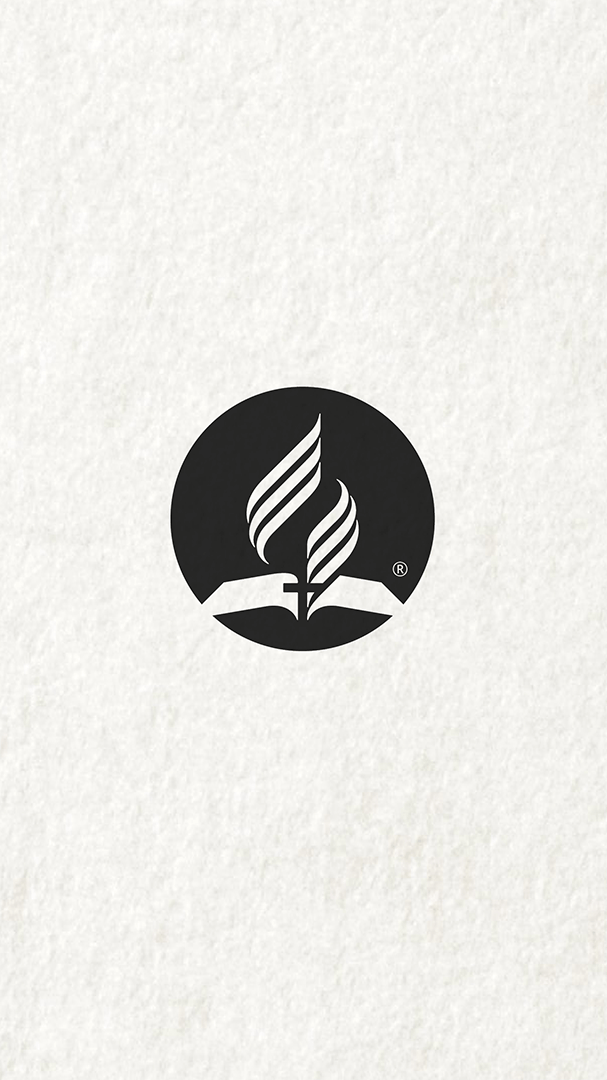 Dinosaur species were also divided into six subgroups (phylogenetic tree) starting from the orders ornithischia and saurischia. To better understand and know their main physical characteristics, read the boxes below:

THEROPODS: Gathers the largest predators on Earth, such as T-Rex, Allosaurus and Megalosaurus.

SAUROPODS: These are the largest animals that have ever been here, such as Argentinosaurus, Brachiosaurus and Apatosaurus.

CERATOPSIA: They had adornments on the head, such as the Triceratops, Torosaurus, and Pachynosaurus.

STEGOSAURS: These dinosaurs had plates on their backs, such as Stegosaurus and Kentrosaurus itself.

ANKYLOSAURUS: They had a type of armor that armored practically their entire body, plus a club-like protrusion at the end of its tail to defend against carnivorous giants. Ankylosaurus himself is the best example of this group.

ORNITHOPODS: These dinosaurs are known as duckbills. They looked like giant birds and runners, like an ostrich. Its representatives are Iguanodon and Hadrosaurus.

Sounds crazy, but it’s real. The chicken, for example, is the closest relative to nowadays dinosaurs. It’s a bird that doesn’t fly and has a structure similar to theropods, such as the Tyrannosaurus Rex and the Velociraptor. This reinforces the idea that dinosaurs had feathers. Can you imagine the glorious T-Rex looking like a giant chicken and eating up other animals?

A research study published in 2016 in the scientific magazine Proceedings of National Academy of Sciences (PNAS) says that all carnivore dinosaurs had feathers. In other words, the T-Rex could really look like a giant chicken. The Pterosaurs, cousins of the dinosaurs, had structures that were similar to the fur spread out through their bodies. The coelurosaurs had multicolored feathers and they lived almost all over the world. In 2012, German paleontologists discovered a young carnivore Megalosaurus covered in feathers. In the same area, it was also discovered an archaeopteryx, a theropod that was similar to a bird covered in feathers. Feathers had also the purpose of accessorizing the dino, which was a great help when in need of winning over a mate.

Fossils are the main proof that dinosaurs existed in the world. To well understand the topic, fossils are remains of animals, plants and other living creatures that are preserved in rocks, sediment, ice or amber (resin). The material is as hard as a rock and the color is dark. Some paleontologists have also found fossilized footprints in rocks. The preservation condition of a fossil is impressive. A bone can be intact for millions of years. But fossilization seldom happens, since organic material decomposes quickly. A fossil exists because sediments covered a living being almost instantly after their death.

Paleontologists know through their studies when there is a fossil in sediment, but some people simply have the good fortune of discovering in their own backyards a skeleton of some pre historic animal. Many constructors end up finding fossils during the process of digging. However, few of them look for research institutes to report it because they don’t want to stop their construction project. Basically everything that is known today about dinosaurs is deduced from found fossils.

HOW MUCH DID A DINO EAT?

One Argentinosaurus weighed approximately 100 tons, equivalent to the weight of 17 African elephants (each weighing 6 tons). Can you imagine how many leaves he needed to eat to maintain this “small” body? It’s true that the larger the size, the greater the amount of food needed. But the amount is also related to the metabolism of these animals, which you won’t know only with the study of fossils.

Paleontologist Martin Sander of the University of Bonn believes that a Sauropod, just as the Argentinosaurus, needed to eat about 100,000 calories a day to survive. That’s equivalent to half a ton of leaves! He spent all day just chewing. But carnivores, which fed themselves eating other dinosaurs, could eat less often. But it is impossible to know exactly how much meat they ate. A T-Rex, for example, could snap up 250 pounds of meat at once. That’s about half a cow!

Everybody knows T-Rex. It’s the most popular one and most feared of the carnivores, even. The most popular herbivores are Stegosaurus, Triceratops and the giant Argentinosaurus. But some species were more popular in the old days than today. Allosaurus, for example, dominated North America. They were Theropod carnivores that were 12 meters long and 3 meters high. Like the T-Rex, it used its jaw to kill its prey and thereby attacked even giant Sauropods. Another famous is the Velociraptor, which is considered one of the most intelligent dinosaurs that ever inhabited the earth, except for the Troodon. They were numerous and liked to hunt in packs, because they were only 2 meters long and less than 1 meter high.

There is no denying that the T-Rex is the big star. Its scientific name is Tyrannosaurus rex, which means “tyrant lizard” or “king tyrant lizard”. He belonged to the group of theropods and was obviously a mega carnivore. Its 5 tons were distributed along its 13 meters long and 5 meters high to the shoulder. It was discovered in 1905 by paleontologist Henry Osborn, who also discovered Velociraptor in 1924. Tyrant fossils were found in the northern United States and southern Canada. Among its attributes were sharp eyesight and carving teeth that were the size of a small banana. His teeth cut into the flesh and his muscle-coated jaw crunched the bones of its pray like biscuits. Some recent studies also indicate that these animals could run at 17 km/h despite their weight. No wonder he is known as the “king of the dinosaurs”.

Dinosaurs are so dear and awaken so much curiosity in scientists that they have become stars of science fiction. No wonder the Jurassic Park franchise, made up of three films, was one of the most profitable in the world. The first movie, released in 1993, sold the most tickets at the time. The films illustrated what people imagined, as until then there were no such realistic representations of these animals. The film’s producers even invented the sound dinosaurs make in the plot, because unfortunately there is no way to be sure of that only with fossils.

In the second dinosaur franchise, Jurassic World, the idea is to try to make giants relate more and more to humans. This time, the writers dared to insert genetically modified hybrid creatures into the story.

BRING THE DINOS BACK!

Movies about dinos make people even more fascinated. After all, can’t science really “resurrect” dinosaurs like it happens in fiction? One of the most striking scenes from the first Jurassic Park movie is the explanation of animal reproduction through a DNA sample. It seems so simple that you can barely believe there is no T-Rex walking around yet. But in fact, it is not simple at all.

DNA collected from the fossils of bloodsucking mosquitoes and animals themselves are incomplete and very degraded over time. To reproduce, recreate or clone a creature you must have a complete and pure genome. This has not yet been possible for dinosaurs. But recently scientists at Harvard in the United States have been able to isolate a mammoth’s DNA, and now they are working on bringing these distant relatives of elephants back to life. All we can do is wait and see if it will actually work. 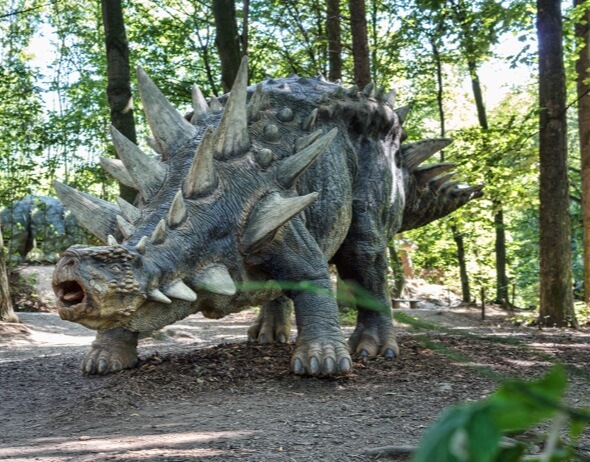 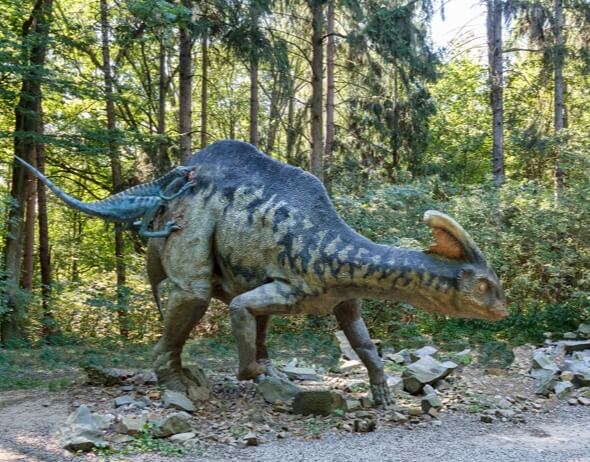 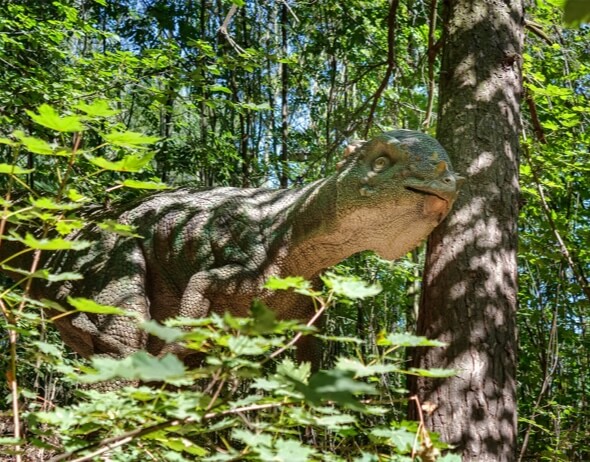 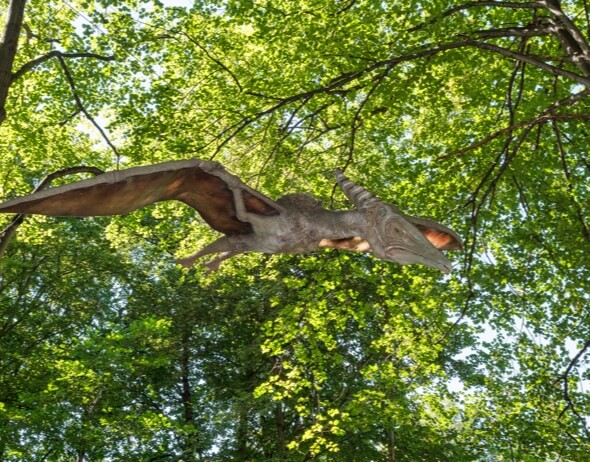 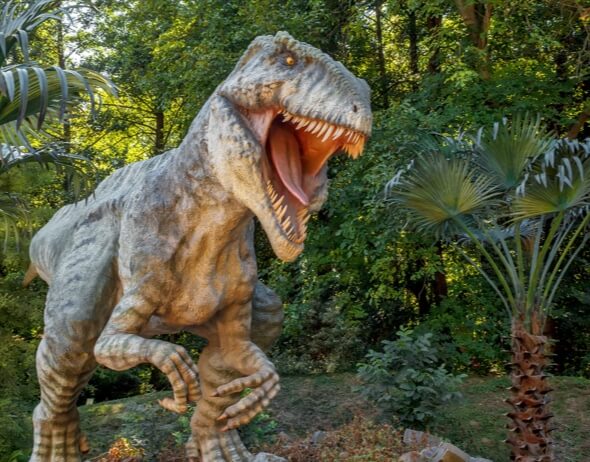 But we still haven’t explained how the dinosaurs went extinct. There are several theories, but the scientific community accepts only two of them: Creationist Theory and Evolutionist Theory.

From a science perspective, for example, dinosaurs have disappeared due to a gradual and natural catastrophe. Creationists believe that God created these animals, but destroyed them in the flood due to their aggressiveness. Some also believe that dinosaurs are the animals we know today, but they have gone through an involutive process and have become smaller and simpler, so to speak.

How does the Theory of Evolution explain the emergence of dinosaurs and their development?

RA: By definition, the idea of ​​evolution is a rational speculation. This theory assumes that a small primordial cell or species has evolved into several species over the centuries. This concerns all living things that have existed at some point in the earth. Darwin says the population increase has occurred in some species, especially less complex animals, which have not developed adaptive organs. On the other hand, the population increase in more complex species is very restricted. The characters (attributes) acquired are considered adaptations to the environment and not organs that allow them better condition to face the struggle for survival. These characters are actually small structural differentiations, which cannot be considered as forms of evolution. For many evolutionary scientists, the term “evolution” does not mean the progress of a species. For them just a simple variation, weather it’s a negative one or not, is already an evolutionary fact. One point suggested by evolutionism is that all species arose from a common ancestor or an original first cell. But that does not explain how these beings could think, for example.

How does the Creationist Theory explain the emergence of dinosaurs and their development?

RA: Creationists believe that God created dinosaurs. They also believe the animals were extinct due to a bombing of multiple meteorites, volcanic explosions and a water catastrophe, all at about the same time. When found, most dinosaur fossils appear with a half-open jaw and a curved tail, which can mean death in the water. This explains the large number of fossils found, as this process depends on rapid burial in sediments such as water and mud. On top of that, most dinosaurs died suddenly, as many scientists have already proven through research studies. Therefore, the flood is the most plausible theory for provoking these phenomena.

LEARN MORE about who created the dinosaurs clicking here. 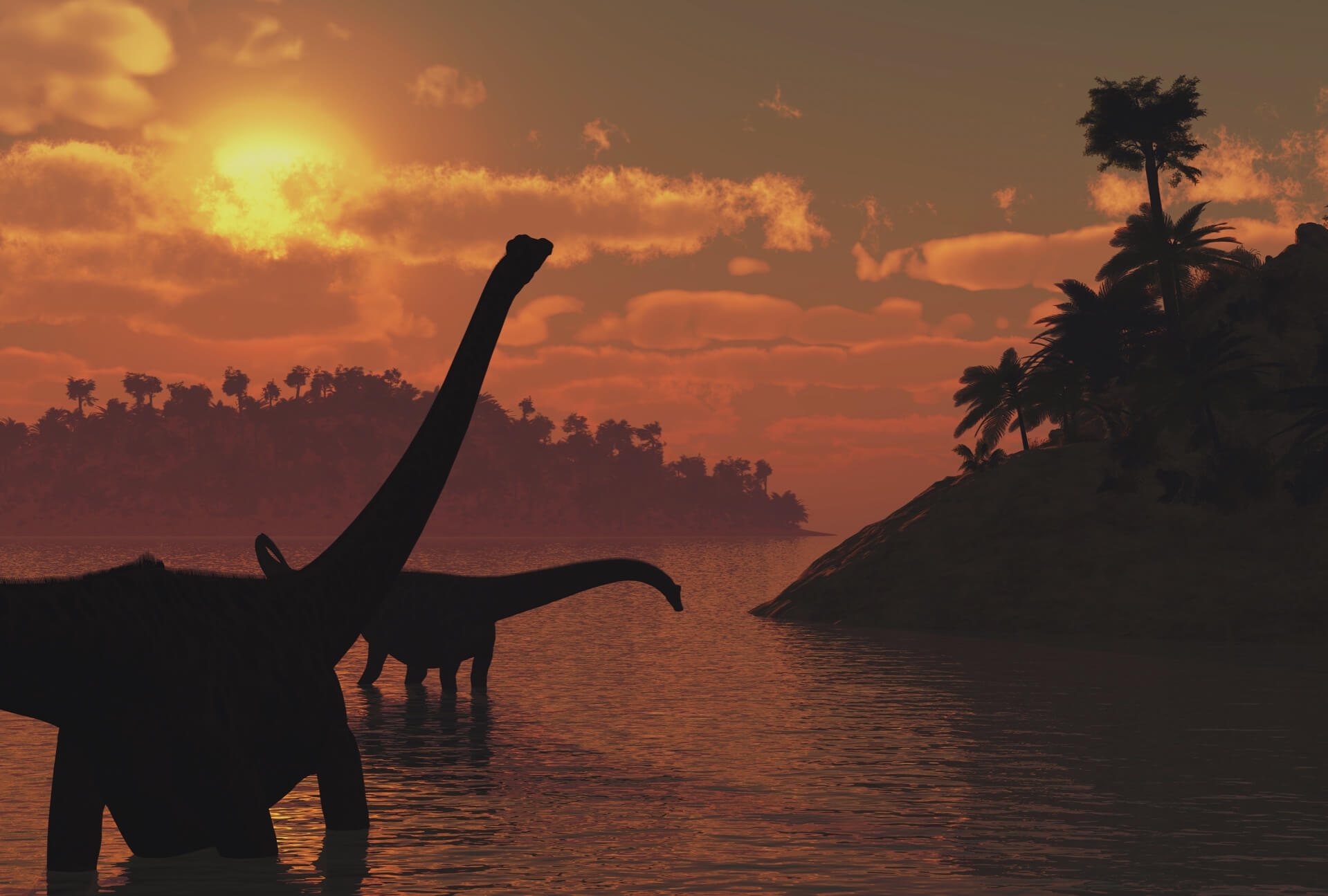 Do you have any questions? Talk to us.